The Laura and John Arnold Foundation, the developers of the risk assessment tool designed to assess those charged with criminal offenses in determining release decisions is being sued over the murder of a Millville, NJ man due to New Jersey’s new Bail Reform Act.

The lawsuit was filed in the United States District Court for the District of New Jersey alleging wrongful death, and that Governor Chris Christie, with the Arnold Foundation, violated Christian Rodgers Constitutional rights, and the rights of all African Americans in the state on a number of levels, including the use of the defective and faulty risk assessment tool designed by Arnold – which then led to his death.

The same day the lawsuit was being filed in New Jersey, Matt Alsdorf, of the Arnold Foundation, and Kelvin Banks, Harris County director of pretrial services, was interviewed by NPR Houston – unabashedly praising the “evidenced based risk assessment”  by claiming that it “levels the playing field for suspected offenders regardless of income.”

Just who is it leveling the playing field for exactly…those victimizing law abiding citizens?

As far as we can tell, Harris County’s new “soft on crime” measures are off to a rocky start.

An April ruling by Chief U.S. District Judge Lee Rosenthal required the release of qualifying defendants who signed an affidavit on June 6 declaring their inability to post bail.

It took only 17 days for Harris County officials and judges to realize that there are serious safety concerns when offenders are released on nothing more than a “promise to appear” just because they say they are poor.

21 percent of the individuals released under Judge Rosenthal’s order have failed to appear for trial. The failure to appear rate for defendants who paid bail was only 3.8 percent. 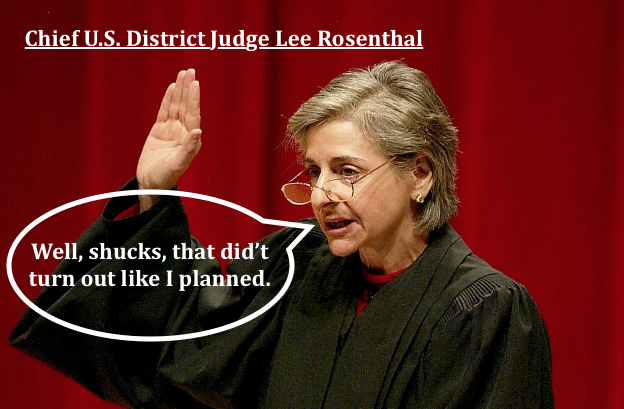 Careful what you wish for…

When judges consider someone’s eligibility for bail, they look at a variety of factors, including the severity of the crime and flight risk.

“The tool that we had prior to now was an interview-based tool, which only allowed us to interview as well as assess 80 percent of the people,” Kelvin Banks, Harris County director of pretrial services, said.

The new risk assessment tool, which went into effect on July 29, includes nine factors focused on criminal history, including previous convictions and failure to appear in court.

That pretty much covers all defendants, Banks said. They’ll then get a score that tells a judge whether someone is low or high risk.

The tool was developed by the Laura and John Arnold Foundation and is currently used in several jurisdictions across the country.

The foundation’s Matt Alsdorf said it levels the playing field for suspected offenders regardless of income. 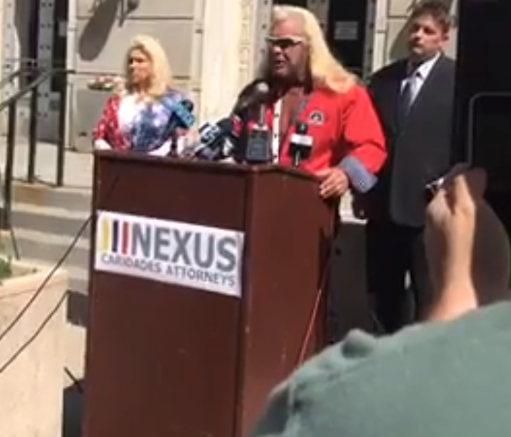 Lawsuit filed against NJ Governor Chris Christie and the Laura & John Arnold Foundation over the murder of Millville man due to bail reform.

TRENTON, NJ – Duane “Dog the Bounty Hunter” Chapman held a press conference on Monday announcing a lawsuit against Gov. Chris Christie by the family of Christian Phillip Nolan Rodgers, who was allegedly murdered in April by a man who was on the the streets because of Gov. Christie’s “Bail Reform” initiative.

The lawsuit was filed in the United States District Court for the District of New Jersey alleging wrongful death, and that Governor Chris Christie violated Mr. Rodgers Constitutional rights, and the rights of all African Americans in the state.

“I wanted to help support the Rodgers family and to send a message to Governor Chris Christie that law enforcement professionals like myself from across the country think he should be ashamed of himself for ignoring our advice and passing the dangerous and fake reform that I believe led to the tragic murder of Christian Rodgers. Christie should be ashamed of himself. The Governor needs to know that the eyes of every American who loves their family and wants to preserve law and order are on him right now,” said Duane “Dog” Chapman in a statement.

On April 9th, 2017, Christian Rodgers was murdered, shot on the street allegedly by Jules Black. Black, the man arrested and charged with Mr. Rodgers murder, had been arrested just days prior on April 5, 2017 by New Jersey State Police.

That arrest stemmed from charges that Black, a convicted felon, was carrying a 9mm pistol in his car during a traffic stop. Black was released after that arrest without having to post bond and with zero accountability due to the New Jersey “Bail Reform” initiative, championed and passed by Governor Christie.

Nexus Services Inc. is a leading provider of immigrant bail securitization and electronic monitoring. The organization funds Nexus Caridades Attorneys Inc. as part of its corporate giving and in an effort to increase access to justice for disadvantaged people across the United States. http://www.nexushelps.com/

Named in the lawsuit are…

(VIDEO) Harris County, TX – Court Order to release those who say they “cannot afford bail” under fire as failure to appear rates increase in just 17 days